Bertram, the maker of the original Hen & Rooster knives, was founded in 1865. Their knives quickly became the finest knives made in Solingen, Germany. In fact, the knives made between 1865 and 1980 in the tiny factory with 14 employees when I purchased the company, remain the finest traditional, production, pocketknives that I know of. The blades are better ground, better finished, and the insides of the knives are so clean they appear to have been mirror polished inside as well as outside.

I bought this company, on the verge of bankruptcy in 1975 and managed to keep it alive for five years, turning out some of the finest knives of the past 100 years. I insisted on thicker liners, always nickel silver, the finest handle materials, and the finest possible workmanship. You cannot compare this 30-35 year old work with that done after the courts dissolved the little company and took the trademark away from us.

The Gentleman's Congress measures 3-3/8" closed with a 1-7/8" sheepfoot blade and a 1-1/2" pen blade. Nickel silver bolsters and liners and a choice of Coral Rucarta or Ivory Rucarta handle scales. Made in Germany between 1975 and 1980 in the original Bertram factory. Both blades are marked with the Hen & Rooster mark on the front side and Bertram, Germany on the reverse side.

C. Bertram of Solingen and their Hen & Rooster knives

In 1864, the firm of C. Bertram Reinh. Sohn, Knifemakers opened in Solingen, Germany. This firm was founded by a man whose hobby was raising fancy chickens, so he began using a logo of a Rooster standing behind a Hen. In the United States, collectors began calling these knives, Hen & Rooster knives, which by the 1950s, 60s, and 70s had become synonymous with superlative quality. These German knives almost matched in quality the English knives of Joseph Rogers, whose quality was maintained until about 1913 when England destroyed itself by letting 70-80 year old generals run a modern war.

In the early 1970s, I sold Hen & Rooster knives which I bought from Kurt Gutmann. When I needed a manufacturer who was capable of a similar quality to make knives for the collector’s series which I had started for the Knife Collectors Club, I made a trip to Solingen. I found that those exquisite pocket knives were being made by C. Bertram and arranged for them to make the fourth knife in that series – the CM-4 Baby Barlow with elephant ivory. That was in 1975. Before the year was over, the manager of the factory approached me to buy the company. In order to keep the company out of bankruptcy, and assure that I had a source of the kind of quality I wanted, I bought the company. We managed to keep the factory open until July 1980. For the first year, we continued to make knives for Kurt Gutmann. When I realized that the factory was losing money on what they sold to him, I approached him with a price increase. He would have none of that and he and I agreed to no longer do business.

Over the next five years, we continued to produce Hen & Rooster knives with the Hen & Rooster logo, but after Gutmann, they were all marked A.G. Russell. In July, 1980, I could no longer keep the little company going and finally it succumbed to bankruptcy in July of that year. At that time, I had a large inventory on hand in Springdale, Arkansas and we have continued to sell those knives through the years. We have very few of those original knives left.

Today, we are adding forty-one (41) individual knives to the A.G. Russell website. These knives came from a man who has been collecting original Hen & Rooster knives for years. There is only one of each as we have described them on our site. If the knife was made before the 1950s, I have indicated that on each individual knife. The others, I have dated to indicate an approximate time they were made: in the 1950s the mark was primarily Gutmann, during the 1960s, Gutmann, Carter, Fife, Kane and others. Those made during the late 1970s were primarily made for A. G. Russell and are so marked. You can find these knives at agrussell.com/hen&rooster.

The factory, with 15 workers, was closed in July of 1980 and the unique quality was lost forever. The trademark was acquired by Jim Frost of Frost Cutlery, with the help of Klaass Cutlery who then produced knives using this trademark. The quality has never been the same.

We sell only those knives made before July of 1980. There is nothing wrong with the Frost Hen & Rooster knives, they are fairly priced for what they are. But, I must avoid confusing my customers, so we do not sell currently produced knives marked in a way that would cause them to be confused with these valuable collectible knives.

There is a forum page on the internet that might be of further interest to you. The link is provided below. As with anything you find on the internet, just keep in mind that all the information is not totally accurate. It all depends on the knowledge of the writer. 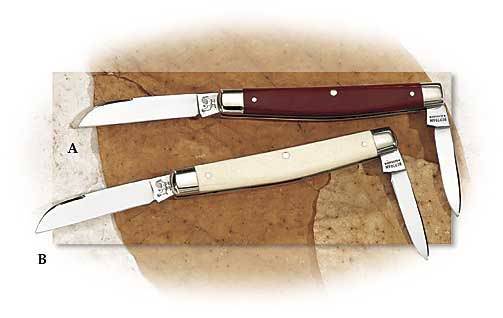