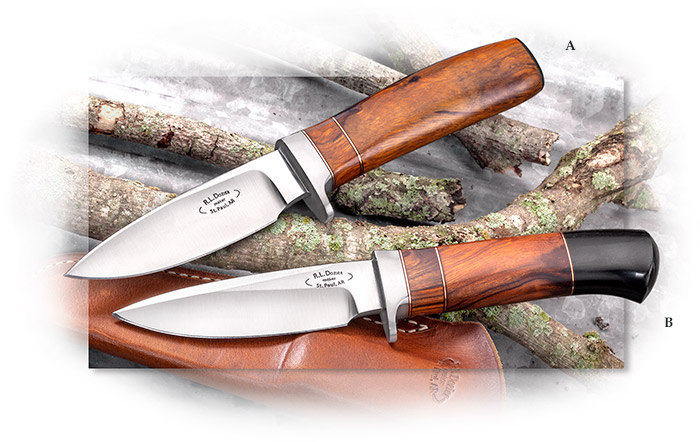 Sixteen years ago, Bob made two versions of this Classic Hunter with the swedged top of the blade. The two versions were the same, except one had a finger grooved handle and the other did not. We have convinced Bob to make this classic hunter again. At the beginning of 2020, we asked him to make a variation with a desert ironwood spacer behind the guard instead of the two black micarta spacers used in the previous versions. The Butt Cap is African Blackwood. We are not putting a fixed limit on these two knives. The quantity made will be limited to what Bob can produce as a part of his overall production capability, which is not huge since he is making these knives himself.

In the process of making knives for that first delivery, Bob found that he liked a different blade grind and a handle shape which he prefers. He made a sample with a hollow grind almost to the top of the blade instead of with the long swedge. This version has a desert ironwood handle and a desert ironwood spacer. We compromised and decided to make both.

These knives are built with the same narrow tang construction that has always been used in making Morseth knives. The tang runs the full length of the handle with a tang nut that, along with epoxy, holds the parts of the handle securely in place. Both blades are D2 at 60-61 Rc. with the special Dozier heat-treat still being done in the Dozier shop. The guards are 416 stainless steel. Measures 8-3/4" tip to butt. Weighs 6.3 oz. Each sheath is handmade by Bob himself and individually fitted to the knife. Knife and sheath are both handmade in St. Paul, Arkansas.

BOB IS WORKING ON IT.