Bob Dozier made his first knives when he was only twelve or thirteen years old. He told me that after those few knives, he did not make another until he was about twenty-three and working as a rough neck in the oil fields in Louisiana. He talked about that first simple knife and then told a story about a co-worker asking to come watch him make knives. Bob had made several knives by then and had created a small rough shop. He said the man stayed and watched until the knife was finished which took most of the day. When it was finished, he asked to look at it. After handling it for a while, he asked Bob how much he wanted for it. Without giving it any thought, Bob says he said $12.50. The man pulled out twelve one dollar bills and two quarters, laid them on the bench, got in his truck and left. Bob went in the house and told his wife he had just sold a knife which took him most of the day to make for $12.50. But, at that moment he knew he was going to be a knifemaker. That was about 1963.

If you had the opportunity to look through Bob’s collection of his old knives, you would find that he has made many different kinds of knives; hunters, Bowies and fighters.

Bob’s Model T22 was the second in a series of fighters that we worked together to develop. The blade is a 5-7/8" Spear Point of just over 3/16" thick D2 with the heat treat that Dozier knives have become known for. The Rockwell hardness is 60-61 Rc. It was Bob who established the popularity of D2 because of the performance he is able to achieve with his control of the heat treat. He has established a trademark for this heat treat - Diamond D2 designated by a diamond surrounding D2. The handle is Black Micarta® with brass and red fiber spacers. The hilt is stainless and the pommel is aircraft alloy aluminum.

Measures 10-7/8" tip to butt and weighs 9.7 oz. The T22 includes a black leather sheath that Bob makes himself. The quality of his leather sheaths is the best you will find.

These knives are made directly by Bob Dozier himself in his shop in St. Paul, Arkansas. 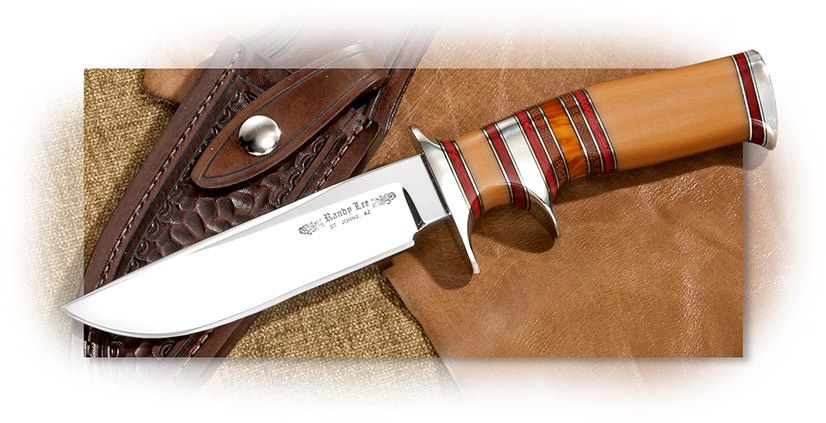