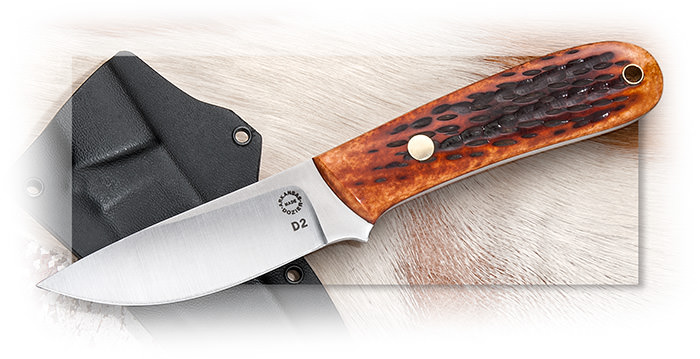 with Horizontal Sheath
An A. G. Russell™ Exclusive

The Dozier Arkansas Made knives are designed and produced for the serious user, the man who makes his living in the woods, on the farm, in construction or other occupations where a serious cutting tool is demanded. Instead of the traditional leather sheath that would over time get limp and rot, Daniel Crotts who runs the Arkansas Made shop, builds precisely fitted sheaths of Kydex® for each knife. Without attention, the sheath will last as long as the knife, your lifetime and your son's. Better than any production knife and far less expensive than most of the handmade knives you will see.

The Yukon Pro Skinner is a serious knife for the hunter. Made of 1/8" hollow ground D2, hardened by Daniel to 60-61Rc. Almost without exception, the blades are found to measure 60.5 Rc. It is not unusual for one of these knives to keep a usable edge through 6-10 big animals, not field dressing, but breaking briskets and reducing the animal to transportable size. The average hunter could sharpen his knife once a season and do fine. The pro will want to carry a small diamond sharpener or the A. G. Russell™ Field Sharpener to touch up the blade when many animals are coming into camp.

With the 3-1/2" blade and the almost 7-7/8" overall length, this is about the minimum working knife for professionals, any one but Dozier would have to make it bigger. The handle is shaped into the distinctive form that Dozier uses for working knives, (as distinct from good looking knives). This blade and handle merge into a useful tool that could be used hour after hour, functioning efficiently and safely. Weighs 5.7 oz. in a horizontal sheath.