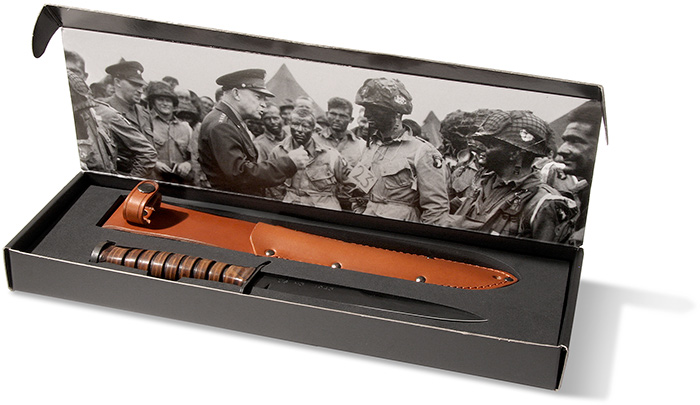 The M3 fighting knife (or M3 trench knife as it was also called) was first issued in March 1943 for use by forces in need of a close combat knife, such as Airbornes and Army Rangers. Those units received priority for the M3. As more became available in 1943 and 1944, it was issued to other soldiers such as the Army Air Corps. This special version of the M3 has A.G. Russell™ 2020 – Italy laser engraved on the reverse side of the blade and US M3 1943 stamped into the obverse side. It is packaged in a presentation box with a WWII photograph of General Eisenhower addressing a group of troops prior to Operation Overlord (D-Day) at Normandy on the inside of the lid, and on the top of the lid "Screaming Eagles – Airborne – 101st Airborne Division".

The 6-3⁄4" blade is C70 carbon steel with a chemically burnished surface, often referred to as "Parkerizing", to protect against rust and to avoid reflection. The handle is built of stacked leather washers shaped into an oval to aid in orientation of the blade. The steel double guard and pommel are traditional. Measures 11-5⁄8" tip of blade to butt. Limited to 170 pieces. Knife, leather sheath and packaging all made in Maniago, Italy.