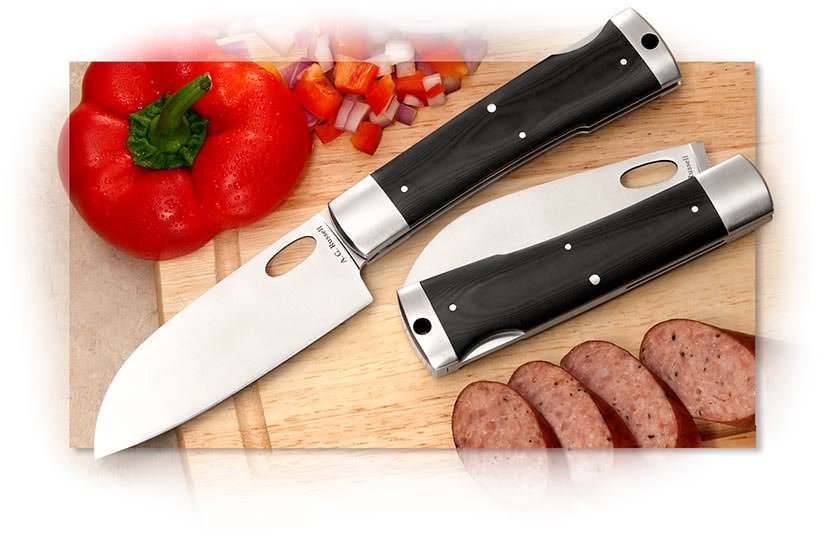 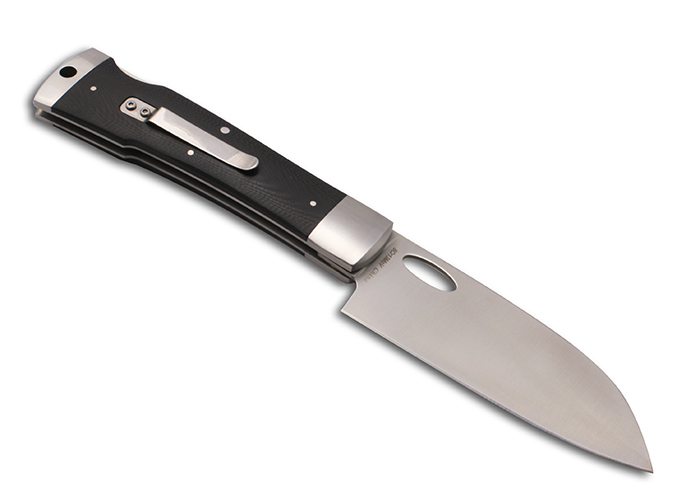 The original A. G. Russell™ Folding Hocho, made for us in Japan for years, has probably been our second best selling knife ever, after the K-93 Featherlite pocketknife. Cooking personality Alton Brown bought several. He told me that he really liked the knife, but he would like it even better if I would put handle scales on one for him. I found that it was impossible to do a decent job of applying scales because of the way the handle is constructed. It is seldom a good idea to fix what is not broken, but Mr. Brown is both a good customer and someone I admire. I have followed his work on "The Cooking Channel" for several years, so I decided to design a new Folding Cook's Knife that would include handle scales.

Like the original, this knife was designed to be a personal knife for those who want the finest possible tool for slicing, dicing and otherwise preparing vegetables and meats. It is not a camp knife or a hunting knife, but works wonderfully in the kitchen of a New York City apartment or a Wyoming hunting camp, when preparing a meal for one or a whole ranch crew.

The blade is very similar to that in the original. It is a 4-1/2" Santoku style blade measuring almost 1-1/2" wide and is made of the same steel we use in most of our traditional pocketknives - 8Cr13MoV at 57-59 Rc., which will hold a razor sharp edge extremely well, yet is easily sharpened. We suggest the A. G. Russell™ Ceramic Sharpener (CS94 . . . $44.95) for that purpose. Keep one in your kitchen drawer and you will find it simple to maintain a very keen edge on all your kitchen knives. The liners, bolsters and clip are all stainless steel; the handle scales are black G10. There is a thong hole at the butt in case you wish to remove the clip and carry in your pocket. Measures 5-3/8" closed and weighs 6.9 oz. Made in China.

Folding Cook Knife II - I've enjoyed this knife a great deal. The construction is excellent, as is the design in most respects. I particularly like the thin blade and the very solid locking mechanism, with absolutely no play or wiggle. The belt clip makes this knife special--it's what attracted me to the knife in the first place and I probably would not have made the purchase if the knife had not been equipped with it. So far, I do like the steel which takes a good edge quickly. Changes: The knife is heavy, and in particular handle-heavy. I'd prefer the balance closer to the center but stll, I would not give up the knife's stoutness to accomplish this. The blade resists opening: very stiff, even after lubing. I've used the knife daily and this hasn't improved much. I will say, I'd rather have a stiff blade than a wobbly one, but I've had cheaper knives that had better action. My real concern, though, has been the thumbhole, which proves to be too small and too far back to leverage the blade open efficiently. I finally took this knife in my shop and enlarged/slightly reshaped the hole about 2mm and that made all the difference in the world. Please take another look at this thumbhole and consider making it slightly larger and farther from the base of the blade. Rating: 8/10 Michael M. Arcadia, MO

You're folding cuisine knife or kitchen knife. which I love but can't seem to find in your catalogues anymore. Superb finish, wide blade, tapered blade. one-handed opening, very solid lock and easy sharpening.
Changes: The superb finished means that a lot of the edges of the handle a very sharp. These should be rounded off. (This was the only real fault. It made the knife uncomfortable to use because it was stabbing you in the palm of the hand. I wore these edges off with the sharpening stone and then it work fine for me) The blade works well it would be better if it were thined down. And lastly this is a very heavy knife maybe some effort could be put into reducing the bulk of the handle. I looked up a folding kitchen knifes because I travel through hostels and hotels and most knifes you find in them you could sit on. There were only two companies that made such a knife, yours and Boker. Yours for superior but the thinner blade on the boker was an advantage.
Rating: 9/10 Chris W. Indooroopilly, ZZ

I have nothing but praise for the A.G. Russell Folding Cook's Knife II. Its design and looks are great, the action on the knife is silky smooth. It took a little bit to be able to flick it out but I now have it down pat. It came very sharp and it push cuts without an effort. Overall I think it's a phenomenal knife and it surprises people when you pull it out of pocket and it turns into a chef's knife. Because I used to own a restaurant and I also cooked I am usually requested to join in the kitchen. Most of the time the knives have never been sharpened and are as dull as a movie about rocks. I do have 2 comments, first a knife this nice deserves much nicer packaging. Only cheap knockoffs come like this. Boker Magnum sells a knife similar to this for the same purpose and it comes in a very nice presentation box, that knife is only $23.00. The quality of this knife needs to be represented as such.
Second, the knife is very handle heavy, you can easily get rid of 2.5 to 3.00 oz by skeletonizing the liners. It is being done on knives from $20 to $2000.00.
I am very happy with the knife and its fit and finish and I hope my suggestions have been helpful. Rating: 10/10 Michael J. Flushing, NY

I BBQ a lot for our family. Additionally, I am a Master Certified Judge for the Kansas City BBQ Association. A Chef or the head cook , at home, you shouldn't walk around the kitchen or patio carrying a Chef's knife. Your Camp Cook's knife is the perfect alternative. I bought one year ago, & another for my Son. Just bought your latest edition for a friend. When preparing a meal or cooking it, the cook frequently needs to cut something. Now, I just reach in my pocket. The "utility" of it is 100% in Industrial Engineering terms. Richard M. Raymore, MO

I am a professional banquet cook and the Cook's Knife II has proven to be one of the most useful pieces of kit that I carry during my day. In a big hotel I never know what room I'll be working in or how far from the kitchen I may be when I need a chefs knife. Everything from opening boxes and breaking the seals of cans to cutting the cap off a prime rib when no-one thought to bring a knife, I never leave the kitchen without it. In fact it has become a great piece of EDC. Thank you so much for a great product. I'm ordering another, because I'm giving the one I currently use to my boss, so he stops borrowing it.  Rating 10/10 Alex S. Spokane, WA

I love it. (A.G. Russell Folding Cook's Knife II). I have been using it at home for all food prep duties while I get to know it. I bought it to take with me on the road as about six months of the year I'm away from home teaching workshops. I stay in apartments or hotels and one of the disadvantages of this experience is that they never supply a decent knife for food prep. The A.G. Russell folding cook's knife fits this need perfectly. It was extremely sharp out-of-the-box and I will be using my usual tools to maintain that edge. The depth of the blade means that cutting vegetables is easy and your knuckles are protected. The length of the blade is adequate to anything I've had to tackle so far. The handle is comfortable to use, the blade has a sufficient curve on it so that items like coriander and parsley can be minced by rocking, and the thickness of the blade means that it cuts cheese more easily than a knife with a thicker back. Kit L. Greenwell Point, Australia