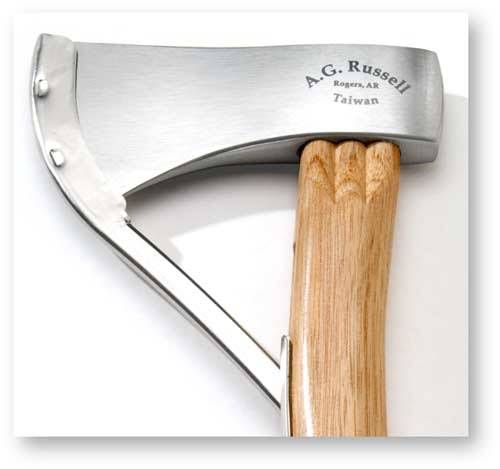 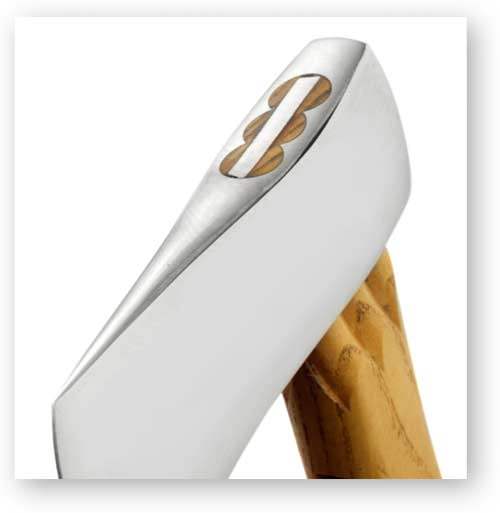 In the 1970s, I was an active outdoorsman. As a farmer and a hunter, I used knives daily, and hand and larger axes at least weekly. I found this small A. G. Russell™ axe, which was being made for me in Solingen at the time, so handy that it was almost always in my hip pocket whenever I left the house. If I was on horseback, then it was fixed to the saddle. I used it as a game axe, for cutting cedar sprouts, and the many other cutting chores around the farm. I have owned and used many small axes. Everything I have learned over those many years of use has been drawn upon to re-design the edge and slim this axe so it will do a better job of cutting and splitting than any previous model.

The axe is based upon Webster Marble's Pocket Safety Axe, which he designed in the late 1800's. Some version of this axe has been produced off and on for over a hundred years, some versions better than others. Mr. Marble was an inventor and an innovator. He designed knives, sights for rifles, a rifle-shotgun, match safes and many other products that are still in use today. Two of his inventions were important to the success of the Pocket Safety Axe. One was a method of fitting a small axe head onto a wood handle. Instead of using an oval hole, he drilled three intersecting holes through the head so that the handle had much greater contact area, giving great strength and rigidity to the tool. The axe head does not work loose when attached to the handle in this way. The other invention was the metal shield that covers the sharpened edge of the axe when it is not in use and folds back into a slot in the handle when the axe is needed. Without this method of attaching the handle, or with a shield that does not snap over the sharp edge precisely, you have an inferior safety axe.

In 1993, the then owner of Marble's Arms Company asked us to make a 100th Anniversary version. One thousand serial numbered axes were made. At $100, they sold very quickly. The company that produced those axes disappeared when the owner died, and the tooling was lost. Until now, it has not been possible to produce this tool to the quality level that it demands. Working with our contacts in Taiwan, we have found a company who is capable of producing an axe that rivals, or perhaps even exceeds, that which we made in Germany in the 1970s and 1990s.

For strength and durability, we use Hickory for the handle. The head is forged from 1070 High Carbon Tool Steel tempered to 50-55 Rc. It is then finished to a high polish and lacquered to prevent rust. It weighs just over 16 oz. and measures only 10-5/8" from top of head to end of handle. The head measures 4-1/2" from poll to sharpened edge and the cutting edge measures 2-3/8". Made to A. G. Russell's specifications by the best forging house in Taiwan. Like everything else in our catalog, this axe carries the A. G. Russell™ Customer Satisfaction Guarantee.

AG Russell Safety Axe - The edge of this hatchet had a pronounced "edge", and a nick.  It took a fair amount of work with a "stone" to clean it up.
I had a previous hatchet from you that was made in Germany and it was sharpened correctly.  You should "talk" to Taiwan and your people about the quality control of their/your products.
PS:  I do appreciate your customer service.   Changes:
Improve quality control  of products made in Taiwan.  Improve the inspection of products received from Taiwan.
Maybe go back to Germany ?
Rating: 8/10 Carl B. Gold Creek, MT