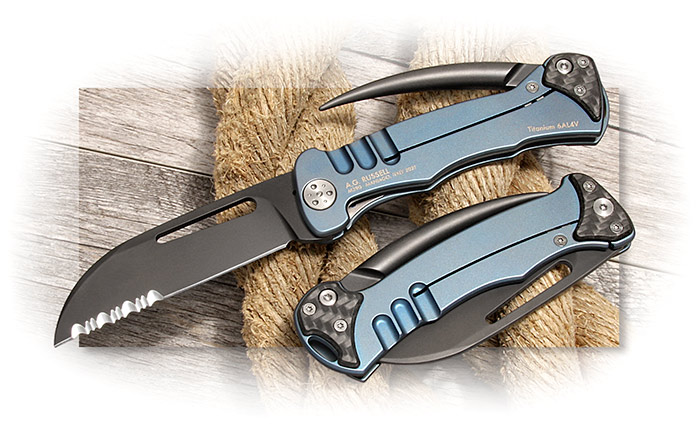 In 1990, we introduced a Sailor's Knife which we had made in Japan. We first offered it with A.G.'s Coral Rucarta and then with Smooth White Bone and Black Micarta before discontinuing it in 2008 because we could no longer get the quality we needed. Year after year those knives were durable and dependable for our customers, but A.G. felt that a new, modern design using modern materials was needed. In a meeting at the 2004 SHOT Show with Italian manufacturers, he realized he had found the company that could make the knife he envisioned. Sitting in that meeting, on a scrap piece of paper he sketched what became the SeaMaster.

A.G. had had requests from sailors for a knife with locking mechanisms for both the marlin spike and the blade, and for serrations on the front end of the blade. They insisted that would make cutting rope easier. A.G. had tested that concept and found it to be true. Those requests led to his vision of the SeaMaster. We are reviving the SeaMaster as 2.0 with just a few changes.

This new version of the A.G. Russell™ SeaMaster™ is also being made in Italy by the same manufacturer. It is the same size as the original with a 3-1⁄4" flat ground blade of M390 stainless at 60-61 Rc., instead of ATS-34, with serrations on the front half of the blade. The 2-3⁄4" marlin spike is 303 stainless at 55-57 Rc. Both are DLC coated. This is a very tough coating, with a hardness of 80+ Rc. and provides great rust resistance. As a part of the 4-1⁄8" Titanium handle are two Frame-Locks, one locks the blade, the other the spike, in the open position for convenience and safety. With a black blade and spike, colorful Titanium handles and carbon fiber onlays (G10 on the original), this is a visually striking knife.  Measures 4-1⁄8" closed. Weighs about 3.1 oz. Made in Maniago, Italy.