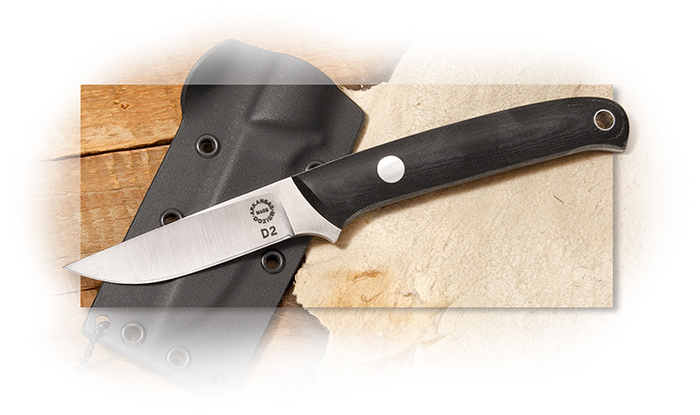 This is a small personal knife, or neck knife, with the same super edge holding D2 steel Bob puts into his much larger hunters and combat knives. This handy little knife with the canoe shaped handle is ideal for the kayaker or canoeist. Its 2-7/8" straight blade can be used as a small game knife or as a personal all purpose utility knife, suitable for anyone who has a need for a top quality knife of this size. The hollow ground blade of D2 at 60-61 Rc measures 11/16" wide and 1/8" thick. The knife measures 6-7/8" overall and weighs 2.8 oz. Bob, the acknowledged master of Kydex®, has developed his own Neck sheath which holds the knife securely in place, until you release the knife by pressing your thumb into the lock release area, as you begin to pull the knife from the sheath. Very secure and very safe.