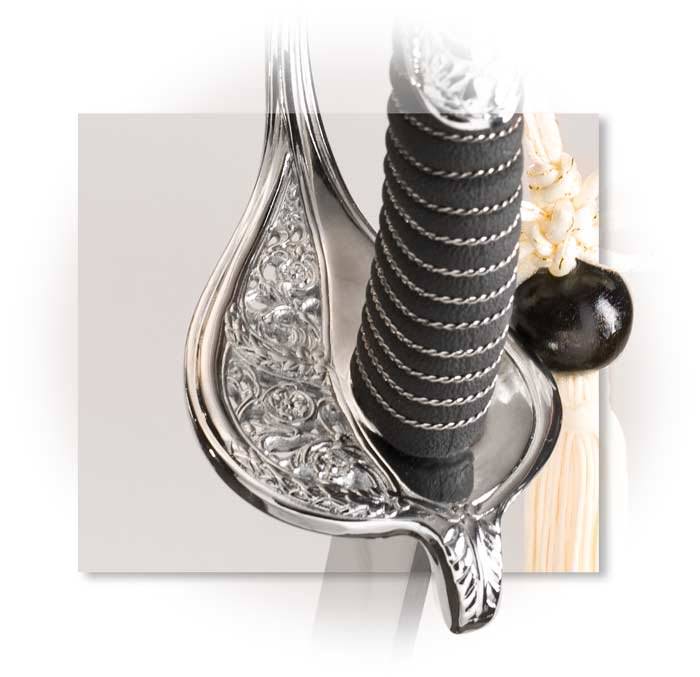 When the ceremony calls for a little drama!

Sabrage is the technique for opening a champagne bottle with a saber. This technique became popular in France after the French Revolution. The saber was the weapon of choice for Napoleon's fearsome cavalry and the spectacular victories across Europe gave them plenty to celebrate. Napoleon is known to have said "Champagne! In victory one deserves it; in defeat one needs it."

An experienced sommelier can open a bottle with a very small loss of champagne. The saber is slid quickly along the neck of the bottle toward the lip striking it at just the right point to send the cork and collar flying across the room (instructions can be found at wikihow.com or on youtube™). Be prepared to practice. I would suggest chilling a few bottles of cheap bubbly for perfecting the technique before using it on the Dom Perignon.

The 15-5/8" blade is T5MOV stainless at 54-56 Rc. It is not meant to cut, so has not been sharpened. The handle is molded rubber wrapped with brass wire and the guard and pommel are nickel-plated cast iron. Weighs 1 lb. 10 oz. Includes a display stand and ships in a presentation box that matches boxes used to pack expensive bottles of wine.

The Viper Evolution was Perfect! Great lines, sits well in the handle, great functionality, terrific value. Holds it own against a hand made knife. I have also bought several of your Fox Champagne Sabers; great gifts! They were used at weddings creating great "Wow!" moments. Geoffrey F. Glastonbury, CT