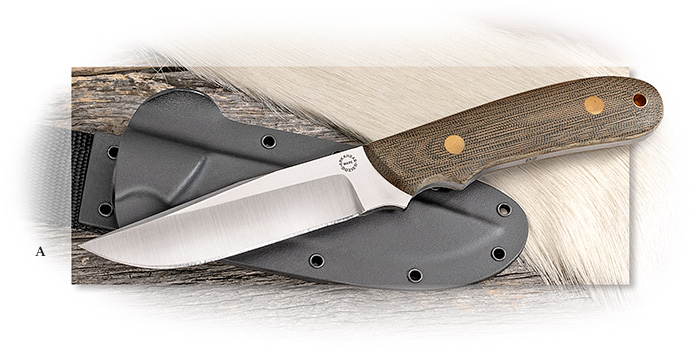 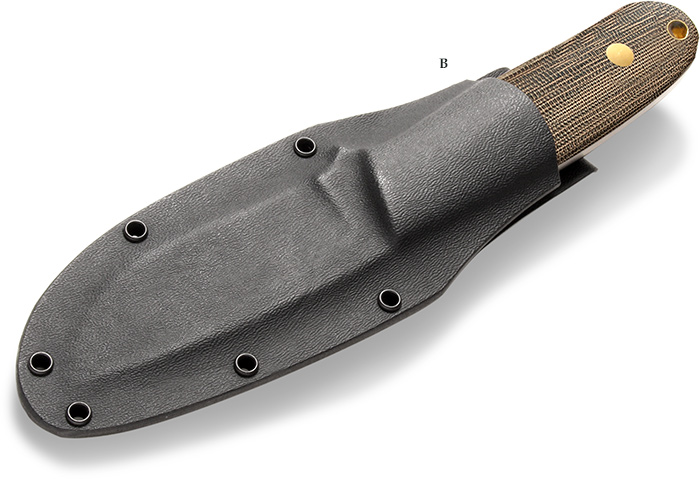 Bob Dozier's Professional Guide's Knife has been available from A.G. Russell Knives since 1994. In all those years, the only change Bob made was to offer it with his Wilderness Sheath. We recently asked Bob to make the knife with each of the sheaths, with green micarta handle scales. We have sold a few in our walk-in retail store here in Rogers, but we are just now offering it in this catalog and online.

The knife was developed for the professional packer or guide who works in remote areas and does not want to carry more than one knife. It is large enough to do the whole job on any big game animal as well as camp chores. It will also still have a good edge when other knives have become dull. Using his standard D2 at 60+ Rc., which he heat treats in his own shop to assure quality control, Bob has produced a man-sized knife with an edge that will get you through a long day of work. Both the blade and the handle are larger than most of his knives. This knife is perfectly suited to the man with large hands, or regular hands with big jobs to do.

The 4-3⁄4" clip point blade is 3/16" thick D2 at 60-61 Rc. The handle scales are green micarta with aircraft alloy pins and lanyard hole liner. Measures 9-3/16" tip to butt. Weighs 6.9 oz. Available with a vertical Kydex sheath, or Bob's Wilderness Sheath with a nylon webbing belt loop. Each sheath is individually molded to that specific knife. Handmade in Springdale, AR.

We currently have a good quantity in stock, but if not in stock when you order, delivery typically will take 3 to 4 months.

Comes with vertical Wilderness Sheath, which has a nylon webbing belt loop.