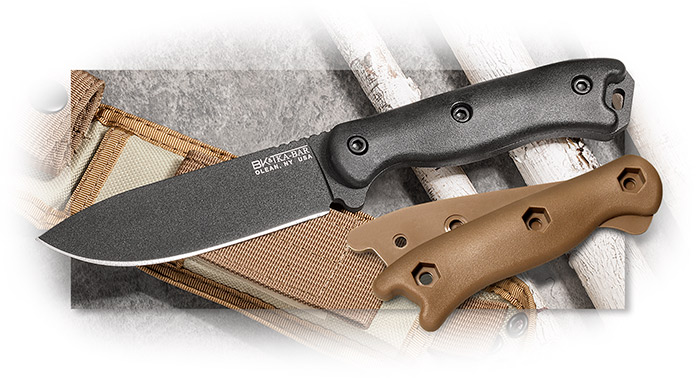 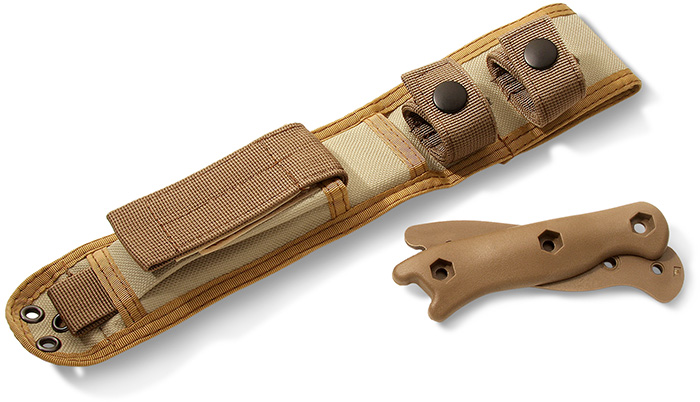 Ethan Becker, an avid outdoorsman and hunter, thoroughly tests all his designs - the BK16 is no exception. This moderately sized field knife has a drop point blade that is short enough for easy choke-up, creating great tip control for detailed tasks such as skinning, but it's big and tough enough to do moderate batoning for kindling to start your camp fire. The 4-3/8" drop point blade is 1095 Cro-Van high carbon non-stainless at 56-58 Rc, with a black powder coat to prevent rust. Blade measures 3/16" thick and 1-1/4" wide. The edge angle (20 degrees each side) is designed for the uses you would expect for this type of knife.

The handle scales are injection molded Ultramid®, a material known for its high mechanical strength, stiffness and thermal stability. They are contoured and smooth to ensure there aren't any rub spots to blister your hand.

A pair of black handle scales are installed and an extra brown pair are included. The tang flares, creating a guard to ensure your hand never travels onto the blade. Measures 9-1/4" overall. Weighs 6.2 oz. Includes a MOLLE compatible Cordura® sheath with hard insert. The knife is made in the U.S.A. The sheath offshore. Suggested retail is $138.65.

The BK16 was always one of Ethan’s favorite knives. See our interview video below: