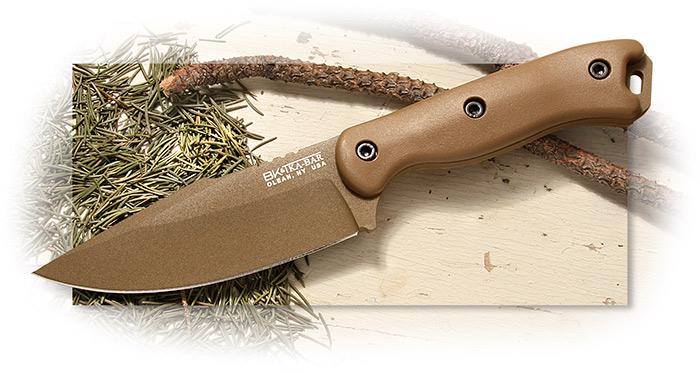 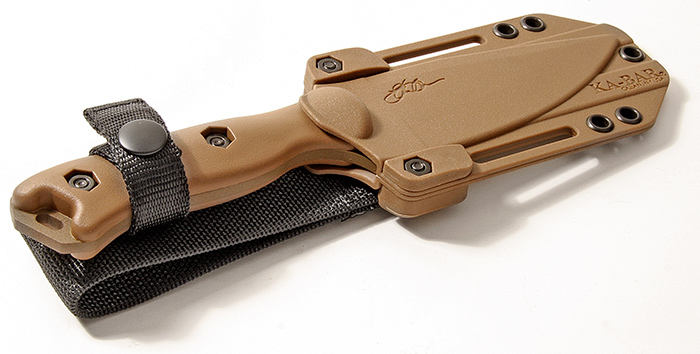 In the early 1980s, Ethan Becker founded Becker Knife and Tool, focusing on the large tactical and survival knives he had always wanted for himself. In late 2008, Ka-Bar took over the production and marketing of his most popular designs. The Harpoon (BK18) is a great addition to this selection. A great size for campers, hikers or hunters.

The 4-1/4" blade is 1095 Cro-Van high carbon non-stainless at 56-58 Rc, with a brown powder coat that matches the color of the handle scales. It measure 3/16" thick and 1-1/2" wide. The edge angle (20 degrees each side) is designed for the uses you would expect for this type of knife.
The handle scales are injection molded Ultramid®, a material known for its high mechanical strength, stiffness and thermal stability. They are contoured and smooth to ensure there aren't any rub spots that blister your hand when the work day is long.

Measures 9-1/4" overall. Weighs 7.2 oz. Includes a brown injection molded sheath with nylon belt loop that allows it to move freely on your belt. The knife is made in the U.S.A. The sheath offshore. Suggested retail is $144.95.