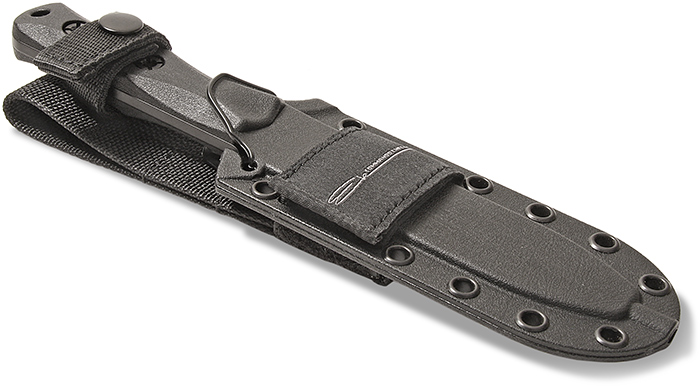 The Ek brand began in 1941 when John Ek decided he wanted to contribute to the American war effort during WWII. Employing disabled Americans, Mr. Ek produced six different models of knives. He referred to these knives as "Ek Commando Knives" as they were purposely built for close quarter usage that would become a hallmark of the US Marine Raiders, US Army Rangers, First Special Service Force, and Office of Strategic Services' Operational Groups. In order to purchase an Ek Commando Knife one had to send in proof of military service. Americans have carried Ek Commando Knives in World War II, Korea, Vietnam, Afghanistan, Iraq, and countless other locations in between.

The company continued producing knives until purchased by Blackjack Knives in 1993 where it pretty much languished with only limited production. In 2015, Ka-Bar acquired the EK brand and production began in Olean, NY.

This Ka-Bar Ek Commando has a 4-3/4" short clip point blade of black-coated 1095-CroVan steel at 56-58 Rc. The blade is etched with a copy of John Ek's signature as well as the Commando Knife Co. Logo. The textured Ultramid handles have the X-head fasteners traditional to Ek knives. The Celcon® sheath is MOLLE compatible and manufactured in the U.S.A. Measures 9-1/8" overall. Weighs 6.7 oz. Made completely in the U.S.A. of German steel. Suggested retail is $161.74.