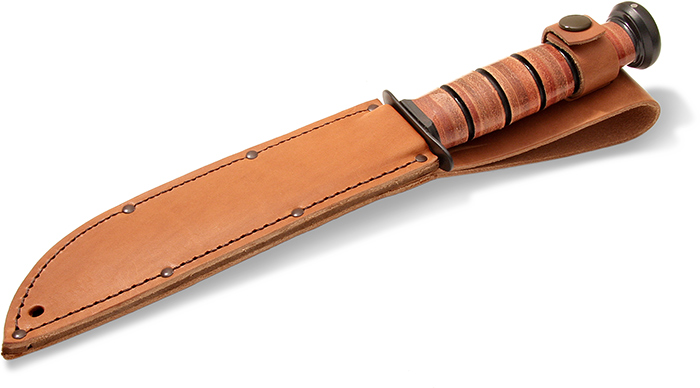 That same knife is still being manufactured in the U.S., and as has been the tradition, has always been marked with U.S.M.C., Army or Navy. Customers have been requesting this knife without those marks and finally in 2019 we see Ka-Bar has added that variation to our choice of "Ka-Bar" knives. This version will appeal to those of you who want the history and look of an original Ka-Bar but may not want it with a specific military insignia. It is simply marked Ka-Bar Olean NY on the obverse side with no mark on the reverse side. The same 7" Bowie style blade of 1095 carbon steel at 56-58 Rc. with an epoxy powder coating for corrosion resistance and to cut the reflection, and the same stacked leather handle and steel butt and guard. Measures 11-7⁄8" from blade tip to butt. Weighs about 10.1 oz. The included brown leather sheath in unmarked. The knife is made in the U.S.A. Suggested retail is $134.96.