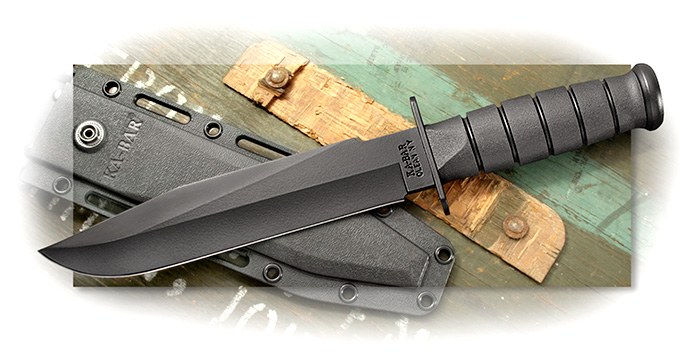 The "KA-BAR" was originally designed to serve our troops during World War II, and is still doing its job 80 years later. The same classic construction that was used then is still in use today. There have been some simple changes to that classic construction in this variation. The hollow ground straight edge blade is a completely new style blade and the black Kraton G handle has been shaped into an oval, instead of completely round, to allow easy orientation of the blade edge.

The black coated 8" plain edge blade is 1095 Cro-Van steel at 56-58 Rc. The black injection molded, glass filled nylon sheath resists cracking, warping or chipping, with multiple MOLLE compatible lashing and anchor points. All knives are made in Olean, NY, and stamped "Ka-Bar" on the front of the blade and "USA" on the back. Measures 12-3⁄4" tip to butt. Weighs 11.7 oz. Suggested retail is $128.82.