As the name indicates, this tree is a species of buckeye native to California with some appearing in southwest Oregon. It is the burl from the California Buckeye tree that is commonly used for knife handles. There are lots of voids in these burls, so a lot of waste. Recently, some suppliers have begun to use pieces of this wood, that would otherwise be burned, to create what some are calling ShokWood. Pieces of wood with interesting shapes are embedded in a resin to create a very interesting handle material.

A pocket knife blade with the clip beginning far back from the point perhaps one half inch from the handle.

Established about 1875 and in the 1890s and early in the 20th Century made most of the really great knives now sought after by collectors. (Knives like the OVB and others). Today they are probably making the Remington knives; however, they also began making the OVB knives again. Good knives are generally much under rated.

A pocket knife with the handle ends curved up to make a canoe shape.

A knife designed to do the delicate work of skinning around the eyes and lips of trophy animals; this work is called caping because you are removing the cape of the animal.

The mineral that transforms iron into steel. High-carbon steel results when .5 percent or more carbon is present. Only a bare .8+ can be absorbed by the iron, the balance in extremely high carbon steel goes to add hardness. Expressed as C.

An old time term much used by hunters until the 1940s now almost never used in the old meaning of a large folding knife or a fixed blade with a sheath. Today it would only be used to mean a knife made by the W. R. Case & Sons Company.

Once the most widely distributed of all American made pocket knives. Has passed through several hands in the past 20 years and is now making a comeback in the hands of the Zippo Lighter family. Look for real improvement. Shop W.R. Case knives here.

A knife with a clip or spear master blade, a spey blade and a leather punch. Made with many handle shapes including an even end stock.

Has a blade, a wire cutter and cork screw.

The first knives were probably broken pieces of flint or some other form or chert (jasper, agate, novaculite, quartz or other stone with a conchoidal fracture) exposing sharp edges. Many people are knapping flint in the old ways and some are fastening these blades into stag or wood handles.

The smaller of the two Indian and SE Asian deer that furnish antler for the knife industry; these are all shed horn harvested in the jungle by natives. Pictured is an adult male chital in hard antler in Kanha, Central India - Chital Picture Attribution.

For A.G., the reason for a choil simply had to do with the ability to sharpen the full length of the blade edge. In some instances a choil is not necessary because the blade is wider than the ricasso making it possible to sharpen the edge cleanly all the way to the heel. While a choil often adds to the visual appeal of a blade, that is not the reason for one to be used.

Produces hardness and better edge holding when combined with other alloying materials. Used in fairly large amounts, it produces a blade that resists rust. Takes over 12.5% to produce high-carbon stainless steels. Expressed as Cr. 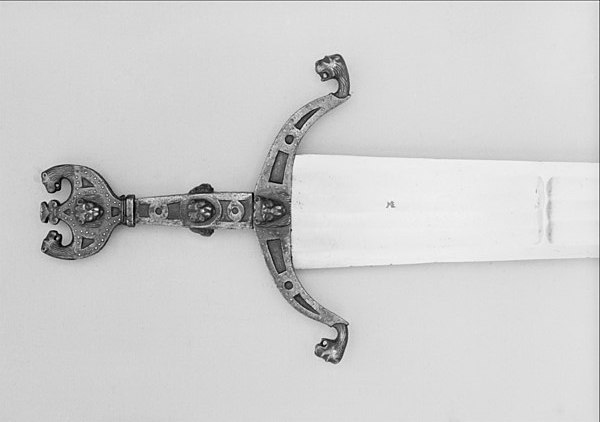 The two handed sword of the Scots from the 15th and 16th century. The Gaelic is "Claidheamh mor" which translates to "great sword." It had a long heavy blade, straight grip, small pommel, and straight quillons slanted towards the blade. The photo is an Albion replica of the claymore. Photo Credit: Søren Niedziella.

In later years, there was a Scotch broadsword of the 17th century that was based on the Venetian broadsword Schiavona. It was a basket hilted broadsword (one hand) that was favored by Scottish soldiers and officers. It was referred to as a "claymore", although many suspect this was erroneous naming from Victorian Scholars. It is still debated, but most tend to agree that the Claymore sword was indeed the two handed great sword initially described.

A blade on which the back line breaks and slants downward to produce a finer and more useful point.

Increases strength and hardness, and permits quenching in higher temperatures. Intensifies the individual effects of other elements in more complex steels. Expressed as CO.

Founder of the Blade magazine and the most prolific inventor in today's knife world. Died July 20, 2011.

An old pen and pocket knife shape, made with two or four blades.generally a pen blade and a larger sheepfoot blade or two of each. The ends are lower than the center of the back of the handle.

Cordia wood is very similar to Teak and is occasionally used as a substitute for Teak in shipbuilding.

A special blade for trimming corns on the feet.

A special blade for cutting into cotton bales for samples.

CPM 10V was the first in the family of high vanadium tool steels made by the Crucible Particle Metallurgy process. Crucible engineers optimized the vanadium content to provide superior wear resistance while maintaining toughness and fabrication characteristics comparable to D2 and M2. Since its introduction in 1978, CPM 10V has become recognized worldwide and sets the standard for highly wear resistant industrial tooling. Carbon-2.45%, Manganese-0.50%, Chromium-5.25%, Vanadium-9.75%, Molybdenum-1.30%Rockwell 58-62

CPM 15V is intended for applications requiring exceptional wear resistance. It has more vanadium carbides in its microstructure than CPM 10V and provides more wear resistance and longer tool life in those applications where 10V has proven to be successful. CPM 15V also offers an alternative to solid carbide where carbide fails by fracture or where intricate tool design makes carbide difficult or risky to fabricate.Carbon-3.4%, Manganese-0.5%, Chromium-5.25%, Vanadium-14.5%, Molybdenum-1.3% Rockwell-59-62

CPM 3V is a high toughness, wear-resistant tool steel made by the Crucible Particle Metallurgy process. It is designed to provide maximum resistance to breakage and chipping in high wear-resistance steel. CPM 3V is intended to be used at 58/60 HRC in applications where chronic breakage and chipping are encountered in other tool steels, but where the wear properties of high alloy steel are required. Carbon-0.80%, Chromium-7.50%, Vanadium-2.75%, Molybdenum-1.30% Rockwell 58-60

CPM 9V is designed for use in tooling that encounters severe wear. Its toughness, or cracking resistance, is higher than other high-wear resistant cold work tool steels permitting it to be used in some applications where CPM 10V, D2 or high-speed steels do not have sufficient resistance to cracking. It is usually limited in hardness to about 56 HRC or lower, and is therefore not intended for applications requiring high compressive strength. Carbon-1.8%, Manganese-0.50%, Chromium-5.25%, Vanadium-9.0%, Molybdenum-1.3% Rockwell 53-56

CPM S30V (commonly referred to as S30V) was introduced by Crucible in 2002 in response to demand from the knife industry for a steel with more wear and corrosion resistance and more toughness. It has vanadium added for higher wear resistance and more molybdenum for better pitting resistance. It is also more resistant to edge chipping with superb edge retention. Contains about 1.45% Carbon, 14% Chromium, 2% Molybdenum and 4% Vanadium.

Definition:A unique tool steel made by the Crucible Particle Metallurgy process.. It is designed from a 440C stainless base with added carbon and Vanadium for exceptional wear resistance and good corrosion resistance. An excellent candidate to replace ATS-34 and 154-CM.

An American steel from Crucible, CPM-S90V is one of the top super steels of today. It features incredible edge retention and wear resistance, and very high corrosion resistance. It is a very expensive steel, and only comes in top of the line knives. CPM-S90V's extreme wear resistance is due the incredible amount of Vanadium in the alloy, and as a result it can be very difficult to grind or sharpen.
​2.3% Carbon, 14% Chromium, 9% Vanadium and 1% Molybdenum. Typically Rockwells at 56-59 Rc.

An American steel from Crucible, CPM-S110V is one of the top super steels of today and is cousin to CPM-S90V. It features incredible edge retention and wear resistance, and very high corrosion resistance. It is a very expensive steel, and only comes in top of the line knives. CPM-S110V's extreme wear resistance is due the incredible amount of Vanadium in the alloy, and as a result it can be very difficult to grind or sharpen.

CPM-S110V is a high-alloy martensitic stainless tool steel manufactured by the Crucible® Particle Metallurgy (CPM) process. This process begins with a homogenous molten bath of high-alloy steel that is forced through a nozzle under high-pressure nitrogen gas to create a spray of small spherical droplets that quickly solidify into powder particles. The small size of the particles forms micro-ingots, drastically reducing the alloy segregation in the steel and ensuring an extremely fine carbide microstructure when the powder is processed into finished steel.
Carbon 2.8%, Chromium 15.25%, Vanadium 9%, Molybdenum 1%, Niobium (Columbium) 3.0%, and Cobalt 2.50%. Typically Rockwells at 58-61 Rc.

With 2.15 Carbon, 0.40 Manganese, 17.0 Chromium, 5.50 Vanadium and 0.4% Molybdenum this is a steel that would be impressive but when you know that it is a Powder Metal steel with the resulting extreme purity, you know that it has to be a great knife steel. Very expensive and not at all easy to work.

CruWear is an air-hardening tool steel, which can achieve a Rockwell hardness of 60-65 Rc. It was made as an upgrade to D2, offering better wear resistance, much better toughness, and hardness.

Carpenter® CTS® BD1N alloy is a nitrogen-bearing, high-carbon chromium martensitic steel that is balanced to provide superior hardness capability to CTS BD1. In terms of performance, it can be comparable to Japanese VG-10.
With 0.85-0.95 Carbon, 1.0 Manganese, 0.30 Phosphorus, 0.01 Sulfur, 1.0 Silicon, 15.0-17.0 Chromium, 0.5 Molybdenum, and 0.10-0.15% Nitrogen, this is a steel that can resist corrosion from mild atmospheres, fresh water, steam, ammonia, many petroleum products and organic materials. With a capability of HRC 60-63.

A slight bend at the tang in a knife with two or more blades that allows the blades to close without touching.

Originally the crown pattern was a square end cigar pattern. The modern cigar is a square, even end pattern.

A modern addition to heat treating tool steels. After the normal heat treat the steel is lowered in temperature very low. Before it became widely available with heat-treating firms many makers were using liquid nitrogen and doing it at home.

The handle curves up to the blade.

The handle curves down to the blades.

The following paragraph is the correct meaning of Custom Knife, however in today's knife world it means a knife not made in a factory, it can be handmade or assembled from mass produced parts. Today the term is totally without meaning.

A curved blade sword sharp on one edge with a strong cover for the hand used on naval vessels in the 18th and 19th Centuries.

Any steel with enough alloying materials that enable it to make good knives; for wide acceptance today that means it must also be stainless. To make good knife blades it must be able to take and hold an edge. Can range from 1070 or 420 to CPM-S90V.